NetEase seems to be getting very popular these days. They’ve been contracted to create games like Cyber Hunter, Nostos, Crusaders of Light and even the upcoming Diablo Immortal! Now, they’re bringing the extremely popular and immersive free space MMORPG EVE Online from PC to mobile!

EVE Echoes is a next-gen mobile spaceship MMO game based upon hallmark EVE Online design principles. In EVE Echoes, players will be able to forge their own path to glory within a massive space sandbox environment, forming alliances with other pilots from across the galaxy to shape the game’s persistent universe.

Players will be free to engage in interstellar combat, exploration, piracy, resource harvesting, industrial manufacture, trade, as well as many other activities across thousands of solar systems. Whether it’s the rise and fall of an empire, or the shifting balance of power, the entire history of EVE Echoes will be written by its players.

I would always read in the news that huge battles and iconic and strange events were taking place in EVE Online, but I never dove in. The game’s community is passionate and hard core and I always thought the game would be too difficult and realistic to play. I also never thought it would be so accessible to someone who plays games as casually as me. Eve Echoes changes that!

The game’s mechanics and UI have been adapted for mobile. I’m still unsure on whether this is the full PC port or not, but it’s clear that a lot of love was put into its development. Like I said, I was never a hardcore EVE player, so it will have to be something we learn as we explore.

There are 8,000 solar systems in the game and when I played the earlier closed beta last year, I truly felt like I was in an open universe. With that being said though, this game isn’t for everyone. The gameplay can be very slow and you find yourself marveling at the beauty of the vast expanse of space and jumping through hyperdrive gates in order to travel between systems more than you are engaged in combat. That was my experience, at least, but I had little to no clue about what I was doing, so that would make sense. I suppose the realism of that is part of its allure. You’ll also need to spend a lot of time managing your ship, commerce and more. I can see this mobile version of the game making more sense to someone like me who enjoys gaming in smaller chunks. If I want to become engaged on a deeper level, enjoy it on a larger screen or spend more time in game, I’ll just boot it up on my Chromebook.

You can pre-register for the game right now, but you’ll have to wait for the game to launch to play it. If you want access as early as next month, that’s July, you can request it in the EVE Echoes Discord. 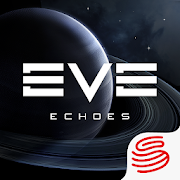